Businesses can learn a lot from the Wales rugby team, says Steve Hutin, the managing director of Rope and Sling Specialists Ltd.

I’ve never been afraid to take inspiration from sports teams or professional athletes. There are those who claim only to look up to deep thinkers and authors. I don’t snarl at the well educated or those who devote their lives to passing knowledge onto others—far from it—but, honestly, I’ve always found it useful to support that more traditional learning by using the sporting arena as a source of motivation.

It doesn’t have to be about bats, balls, and goalposts. I’m sure there are singers, dancers, climbers, adventurers, environmentalists, and others who have backstories and goals that align with people in the business world or those looking for guidance. Never be ashamed of who you choose to look up to.

A proud Welshman, I often draw on the exploits of the national football and rugby teams, and the latter’s recent Six Nations clean sweep provided much to take inspiration from. It wasn’t the success in the tournament alone that stood out, or the nine successive victories before that—the team is on a 14-match winning streak—but more Warren Gatland’s entire 12-year reign as coach, which will conclude after this year’s World Cup in Japan.

Wales’s climb to number two in the world rankings, behind Gatland’s motherland, New Zealand, is testament to the benefits of putting a long-term plan in place. From back in 1998 when Graham Henry took charge of the team, a structure has been adhered to that is only now baring fruit. Steve Hansen, who was coach from 2002 to 2004, and Mike Ruddock, who held the position for two years until 2006, also played a part in recent successes, strange though it may seem.

Notably, Hansen lost the first 11 games of his tenure, which obviously wasn’t part of the plan in itself, but it was never about short-term gains. And we can take that mindset into the business world. Sometimes it’s easier to score a quick win today but it leads to much bigger losses in the future. It takes time to implement new systems or routes to market and in the immediate sense some backward steps might be taken. But with an end goal and an appreciation of the bigger picture it’s worth fighting through those early stages.

This year’s Six Nations success also proved the value of team spirit. That isn’t something that happens overnight. No business leader or sports coach can snap their fingers and say, today we’re going to have great team spirit. For a start, without collective buy-in to the team goal, team spirit is impossible to find. No team or group of people is ever truly together if there are members with their own agendas or those who don’t believe 100% in the objectives.

There are many ways team spirit helps a sports team or business, but I’m going to focus on two. First, it enables a group to achieve beyond its centre of gravity. It might be true that the England rugby team is better man-for-man than their Welsh rivals, but they finished five points adrift this year and Wales won the match between the sides 21-13, despite trailing at half-time. I might be biased but it felt like Wales had the stronger gameplan and better spirit. It reminded me of Rope and Sling (RSS); we’re not the biggest or richest, but nobody beats us on spirit or determination. That makes a big difference to eventual outcomes.

The second advantage of great team spirit, which is related to some extent to the first, is that it empowers a unit to excel in diversity. When the chips are down, that’s when it’s clear who is actually up for the fight and those who are just talking a good game. In what proved to be a pivotal moment in the Six Nations, Wales reversed a 16-point half-time deficit to beat France, in Paris, 24-19. Everyone had written us off but one can only imagine the strength and determination that was shown in the locker room to come out fighting after the break.

England, by contrast, having already lost to Wales, drew 38-38 with Scotland on the final day, despite taking a 31-0 half-time lead. Only they know if team spirit wasn’t what it should have been or if complacency set in, but it’s not becoming of a team chasing the number one ranking in the world.

Gatland said after the France-Wales fightback that his team had “forgotten how to lose” in securing what was at the time a 10th successive win, equalling our longest undefeated run since 1999. A feeling of invincibility can be dangerous in sport or business but if it’s harnessed correctly, it can be an asset. Of course, Wales haven’t “forgotten how to lose”; other teams are entitled to play well and one day soon they’ll lose a game of rugby. But when the camaraderie among a group of people becomes so tangible, a siege mentality takes over, and it’s powerful.

There were moments along the road to Six Nations glory where Wales’s bottle was tested. In the victory over Ireland that saw us clinch the Grand Slam, George North limped off early, for example, and Alun Wyn Jones received extensive treatment on the pitch. The latter carried on but clearly wasn’t fully fit. It could have been seen as a sign that it wasn’t our day but instead it seemed to galvanise the team even more. Had a team experienced these setbacks at an earlier stage of evolution, perhaps without the same team spirit, the result could have been different.

Responding positively to the injuries to two influential players was all the more impressive because Wales had clearly invested a lot into a big start to the match. Ireland were caught napping as Hadleigh Parkes crossed over in the opening minutes and there was no way back. I’m going to remember this game for a long time and will call upon it for inspiration next time we have a business plan in place that is threatened by forces beyond our control. As there was for Wales, there’ll be two choices: let it beat us, or use it as motivation.

You’re only as good as your last game

In sport and business, one has never “made it”. Despite feeling on top of the world, they’re not—Wales remain a long way behind New Zealand and will need to keep improving to get to the World Cup final in early November and then win it. It’s the same for RSS; continued growth to date doesn’t entitle us to future expansion, and we’re a long way from where we want to be one day. There’s always another match or battle to be won.

Gatland has proven an ability to continue to test the team to raise their standards but Wales fans are nervously gazing beyond the World Cup when he’ll leave, wondering what’s next. Interestingly, Sir Alex Ferguson, the former Manchester United (football team) manager, used to speak of his detest for complacency, and Gatland would concur. I hope that’s all they prove to have in common, however. United poorly managed their succession plan and even six years after his departure as manager, the team hasn’t competed at the top of the English game. The Welsh Rugby Union (WRU) must ensure we don’t replicate that demise. The challenge is to win the World Cup and next year’s Six Nations, and then plan to retain the Webb Ellis Cup in France in 2023. Why not?

Thank you for reading. 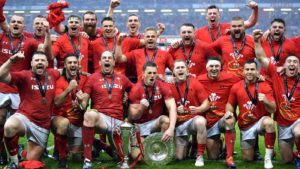